Oldham-based Aksa Housing Association is to feature in the second series of a popular BBC One documentary.

Filming for a second series began this week. The programmes will follow staff as they deal with the variety of tasks and customers they encounter daily.

In the first series, independent production company Raw Television found the human consequences of the economic downturn, with tensions and existing homes in short supply. The work landlords do to tackle anti-social behaviour made some of the headlines. But there were also heart-warming stories of local people faced with change as they grew older, and the joy of success in garden competitions.

The second series will follow the same format but promises to look at some of the more topical issues facing housing providers and their communities.

Aksa is celebrating its twentieth year. 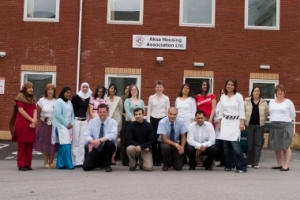 Although it has continued to grow in Oldham, it has also developed new homes for rent elsewhere in Greater Manchester. As a specialist BME association, it joined the New Charter Housing Trust Group five years ago. New Charter was heavily featured in the first series of the documentary and will appear alongside Aksa in the new series.

New Charter’s Group Chief Executive Ian Munro said: “We believe “Neighbourhood Watched” gave a balanced insight into the excellent work housing providers do. Yes, there are risks associated with granting such wide access to the film crew, as recent celebrity-based housing programmes have shown. But good housing is a cornerstone of society, and we hope the second series will show the links with good health, improving education and improving tenants’ job prospects. I’m delighted that two of the landlords in the Group will contribute to the programmes.”

Executive Producer for Raw Television, Lucy Willis said: “The last series of “Neighbourhood Watched” offered a compelling and entertaining window on modern day social housing. We found such a wealth of material that we’re delighted to be making a second series and this time round we’ll be including some new, thought provoking areas. “

The series will be filmed through to early autumn and delivered to BBC One for transmission in 2011.

This article is reproduced courtesy of 24Dash.com.

View all posts by BMENational

This site uses Akismet to reduce spam. Learn how your comment data is processed.