Much stigma surrounds postnatal depression, particularly among some black and minority ethnic communities. Anita Pati finds out how one housing association is helping women cope.

Kafilla Noorin, a mental health community delivery worker at the west Midlands landlord, was visiting the woman who, she says, had ‘been on high levels of anti-depressants and had also been admitted to hospital but hadn’t known who to contact for help’.

‘She had been self-harming and hadn’t wanted to go out. But she didn’t know this was postnatal depression,’ Ms Noorin recalls.

Spanning two years and involving interviews with 96 women, the research is part of Ashram’s ongoing work into addressing mental health inequalities in the west Midlands.

‘The main finding was that people didn’t understand what postnatal depression was and lots of them couldn’t recognise themselves as having it,’ sums up Ms Noorin. Caroline Wolhuter, research manager for Ashram, says that postnatal depression can have serious consequences for the health and wellbeing of families. The research, she says, showed how hidden the problem was.

‘There’s a stigma around mental health 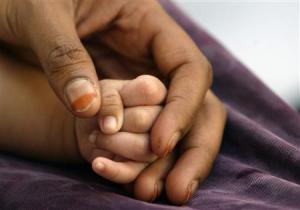 issues and the fear that people will see them as bad mothers and they may lose their babies,’ she says of why women often remain silent about their suffering.

Through the interviews, Ashram found that BME communities it serves didn’t recognise postnatal depression as a condition and dismissed symptoms as the ‘baby blues’. Often the women, mainly from Pakistani, Indian and Somali communities, had arrived recently in the UK and didn’t speak much English, which further hampered their access to services.

The research also found that ‘lots of people with postnatal depression have other needs’, adds Ms Wolhuter – for example, they may need help with housing problems such as overcrowding.

The report found that: ‘In Asian families where the culture of living in joint families exists, a lack of empathy can become a major issue and lead to family disputes and disagreements. Owing to these factors, women often did not feel comfortable disclosing negative feelings after giving birth.’ It also found that voluntary sector groups such as children’s centres and playgroups – which Ashram refers women to – were helpful to women.

Ms Noorin is one of 500 community development workers across England whose roles were introduced under the previous government’s strategy to deliver race equality in mental health care, which launched in 2005.

As a community development worker, Ms Noorin’s role is to gather information from individual BME communities and report back to local health commissioners.

Ms Noorin’s job, which she has held for three years, is funded by the Heart of Birmingham Primary Care Trust, although Ashram employs her. Her remit is to ‘carry out consultations with community members to help them access mental health services’. She helps women that may not even realise they have postnatal depression to specialist services that offer befriending and peer support.

Her outreach work involves attending community events, neighbourhood forums, children’s centres and toddler groups and handing out information and questionnaires to raise awareness of the condition. Ms Noorin targets areas of the west Midlands with a high BME population, and also visits places of worship such as gurdwaras, temples and mosques in order to talk about postnatal depression.

Ashram now wants to build on this work to partner with more charities and health organisations and co-ordinate services to ease hidden problems such as mental health issues and related housing difficulties.

For women like Sunita, the help offered by the organisation can make them realise that they’re not alone. It can help them to come to terms with their feelings and eventually move on to enjoy motherhood.

Sunita*, 25, has two children, aged seven and four. She suffered postnatal depression after the birth of her second child. ‘The whole pregnancy was really iffy,’ she says. ‘I was in and out of hospital, they were saying that they had to do a Caesarean section but they didn’t do any explaining. And when [the second baby] was born, I didn’t click with her or have that bond.’

Sunita says her doctor told her she should be grateful she had children when so many women couldn’t have them and she found consultants and other medical staff dismissive. Sunita became agoraphobic and started self-harming.

Three years later, a friend told her about a new community group for BME women with postnatal depression, one that Ashram now signposts women to. ‘A few women would chat and slowly, slowly, we started talking about kids and childbirth and what our experiences were, and I realised I’m not alone in this,’ she says.

The group has begun outreach work and Sunita works as a volunteer, attending functions and events and liaising with community health services to highlight postnatal depression. Her relationship with her second child has vastly improved since. ‘She’s such an angel… much loved and cherished,’ she says.

*Not her real name

This article is reproduced courtesy of Inside Housing.

This site uses Akismet to reduce spam. Learn how your comment data is processed.